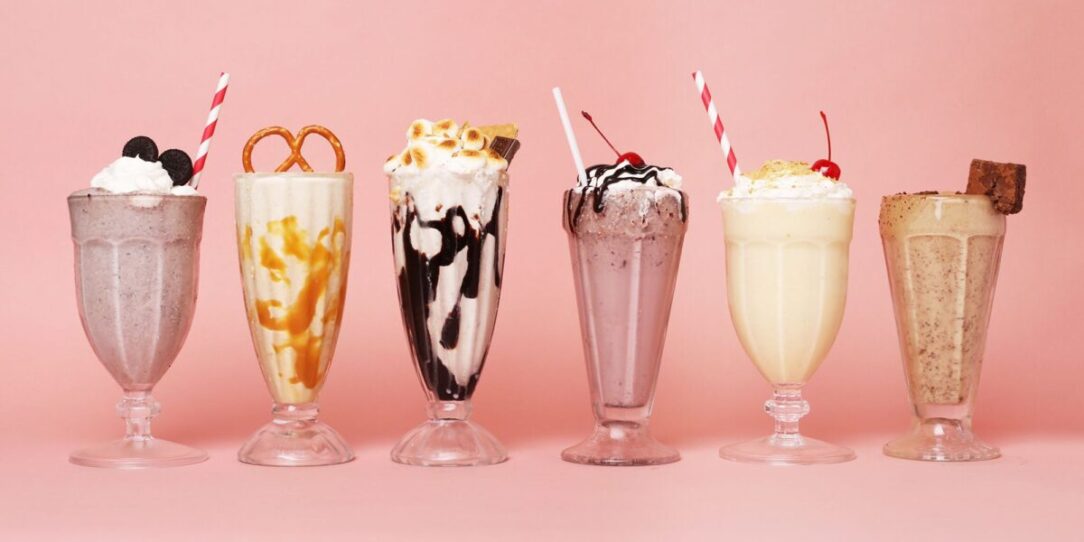 Milkshake is one of the most ubiquitous drinks in the world. It can be found in almost every fast food restaurant or an ice cream shop. The only downside is that it contains a lot of sugar and is rich in calories, so we can’t enjoy it every day.

The History of Milkshake

The milkshake wasn’t’ always the drink we know today. In fact, there were two separate drinks, one called Shake and the other Milkshake. Then there was Cream Shake that had cream in it instead of milk. The closest to modern milkshake was a drink called Egg Cream. Milk drinks are nothing new in our history. As long as we had cows, humans were drinking milk in some form. The problem was keeping it fresh since we lacked refrigeration. The first cold drinks with milk were alcoholic ones, namely Milk Punch and White Tiger’s Milk. Recipes for both can be found in Jerry Thomas’ 1862 bar book. They were similar to eggnog and fairly popular among the ladies and at fancy cocktail parties.

The first reference to modern milkshake is from 1886. Atlanta Constitution mentioned it in its article on May 17th, saying: “The newest Atlanta drink is ‘milkshake’. You get it at the soda fountain. The mixer of cooling beverages pours out a glass of sweet milk, puts in a big spoonful of crushed ice, puts in a mixture of unknown ingredients, draws a bit of any desired sirup [sic], shakes the mixture in a tin can, like a barkeeper mixes lemonade, sprinkles a little nutmeg on the foaming milk until it looks something like a Tom and Jerry [an eggnog drink], sits it out for you and you pay five cents. ‘Milkshake’ is an Atlanta drink. Atlanta is nothing if not original.” 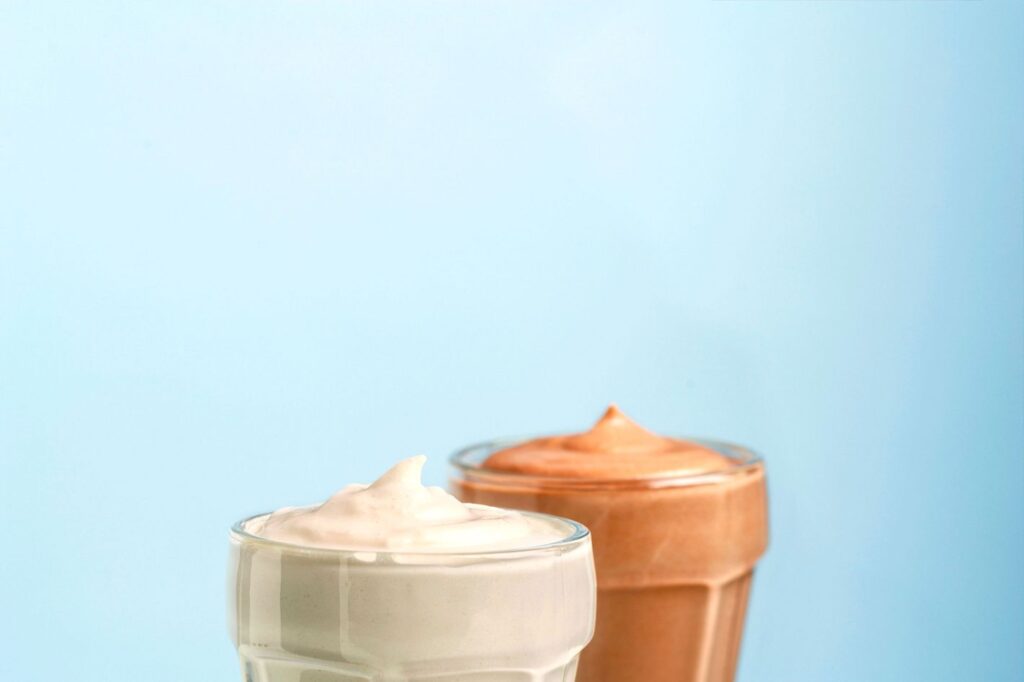 The drink was made from whole milk, vanilla or strawberry syrup, and nutmeg. A quick shake would create light frothing on the top, giving it the name. To speed up the process and save servers from shaking, soon mechanical shakers were invented and soon all soda fountains had one. By the 1900s, the milkshake was described as “wholesome drinks made with chocolate, strawberry, or vanilla syrups.” As you can see, it still lacks one key ingredient, ice cream. It wasn’t until 1922 that a Chicago Walgreens employee, Ivar “Pop” Coulson tried adding ice cream to a mixture of milk, malt, and chocolate syrup. The malt was also a fairly recent invention at the time, designed as a nutritional supplement for babies.

The new drink, called malted milkshake, spread across the nation like a wildfire. Pretty soon, soda fountains became known as malt shops. The process was helped by the invention of blender in 1922 that sped up the process considerably and provided for a smoother drink. Soon, a version without malt was created, since not everyone enjoyed the taste of it.

In 1937, two inventions further increased the popularity of milkshakes. First, Fred Waring created a much better version of a blender, similar to what we use today. Perhaps even more importantly, Joseph Friedman invented a flexible straw, which made it possible to drink milkshakes without having half of it end up on your clothes. Two distinct versions of milkshake dominated the market. The frosted milkshake was used to describe milkshake that had blende dice cream, creating a smooth drink. Floated, on the other hand, had a scoop of ice cream floating on the surface.

Different parts of the country had different names, some of which are still in use. In Massachusetts, milkshakes were called frappes. In Rhode Island, they called them cabinets, in reference to the freezer cabinets where ice cream was kept. Other names included velvets and frosted. There was also concrete, invented in a drive-through restaurant in St Louis. It was a milkshake so thick that it could be served in a glass held upside down though an order window. Needless to say, it startled a lot of customers. Some would argue that concrete isn’t really a milkshake since it can’t be drunk with a straw. You have to use a spoon to get it out of the glass.

Today, we have many brands of milkshake. Each fast-food chain has its own variety, not to mention smaller restaurants and burger shops. Here are some of the best fast food milkshakes you can enjoy in 2020. 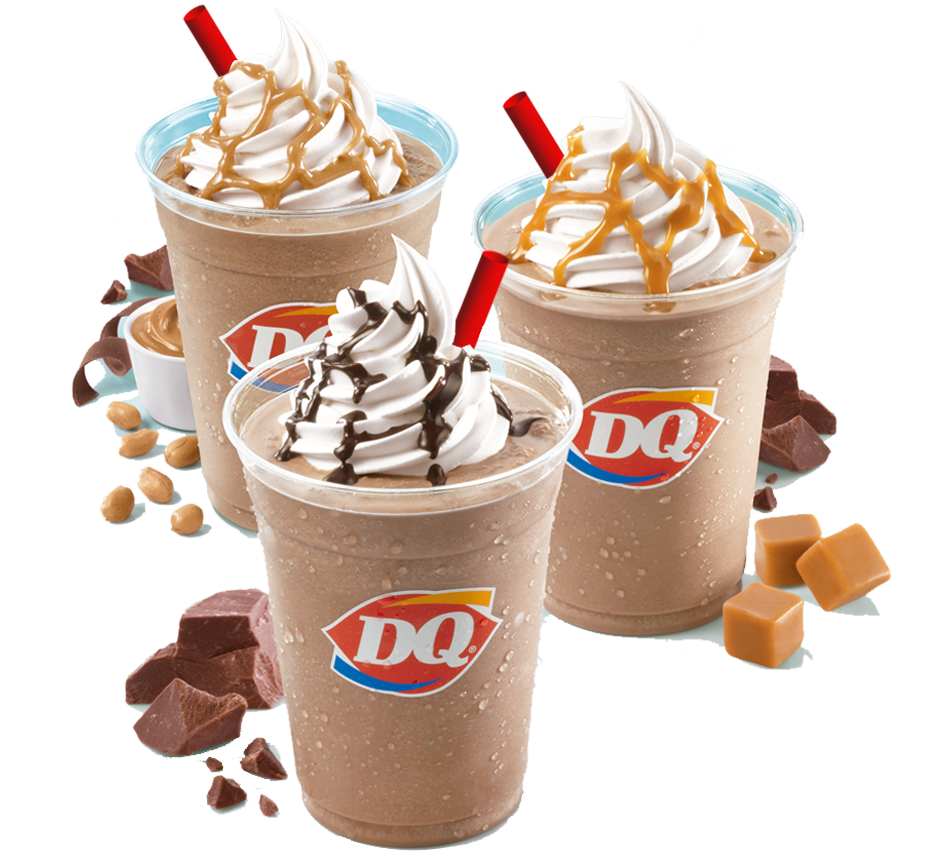 A very delicious milkshake, made wit added malt, a mixture of malted wheat, barley, and evaporated milk. Not everyone enjoys the taste of malt, so be careful when ordering it. 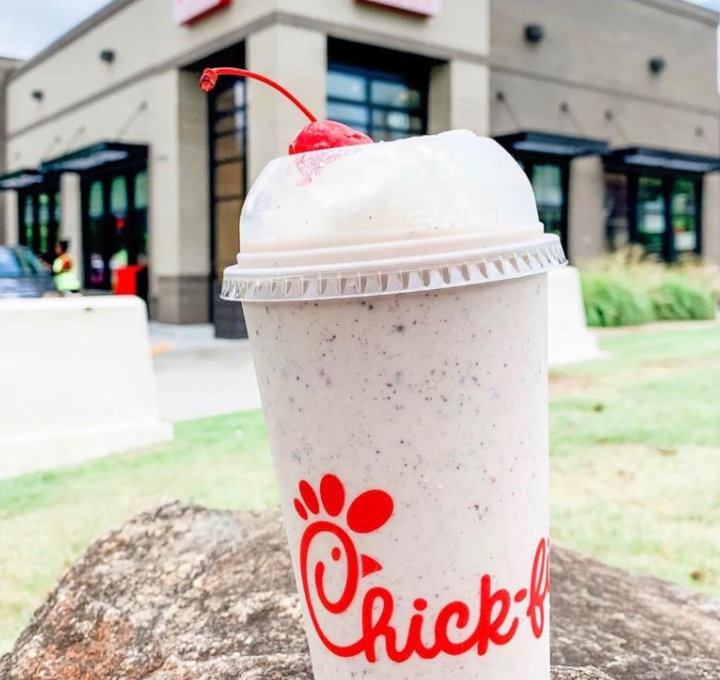 Smooth and tasty Oreos milkshake with a modest calorie count, Chick-fil-A Cookies & Cream Milkshake isn’t too sweet, making it ideal for people who like mild milkshakes.

Another Dairy Queen milkshake, Frozen Hot Chocolate is perfect for chocolate lovers. It has a very strong chocolate flavor but isn’t too sweet. It does have 656 calories, so be careful with it.

A classic, Wendy’s Chocolate Frosty will appeal to most people. It is also fairly cheap and only comes with 340 calories per cup. 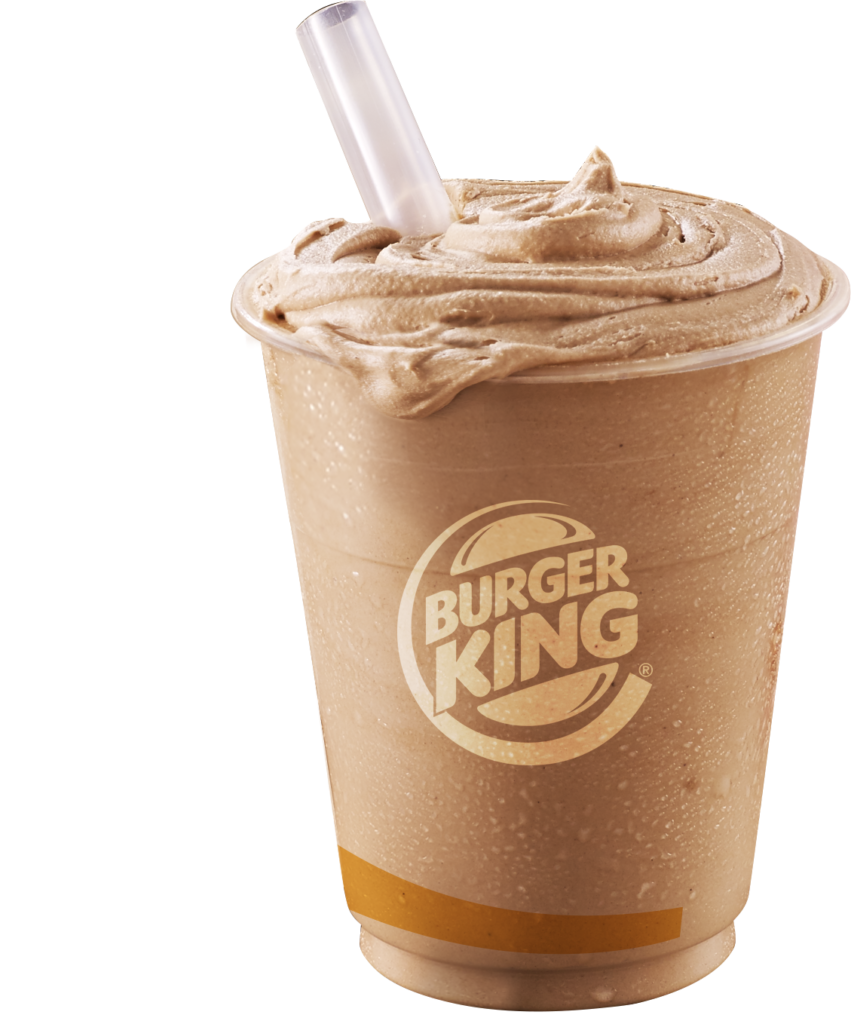 Available in four flavors (vanilla, strawberry, chocolate, and Oreo, Burger King shake is one of the most popular milkshakes in the fast-food industry.

McDonald’s Shamrock Shake is the fast-food giant’s premium milkshake, only available on a limited menu. Apart from the delicious taste, it also boasts a low-calorie count. 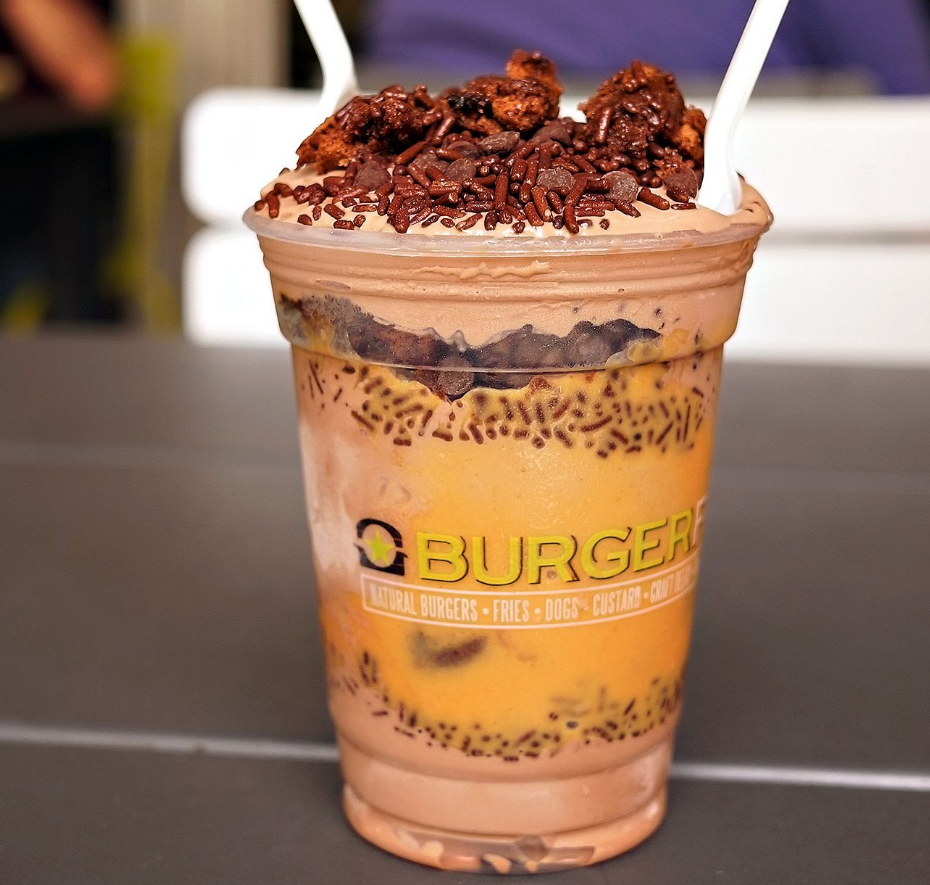 Smooth and sweet, Burgerfi shakes perfectly complement their burgers and is a great addition to any meal.

The amazing taste of Cold Stone Creamery Cake ‘N Shake comes with a price of 1,096 calories per cup. However, it is so great that it is well worth a few extra laps of running. 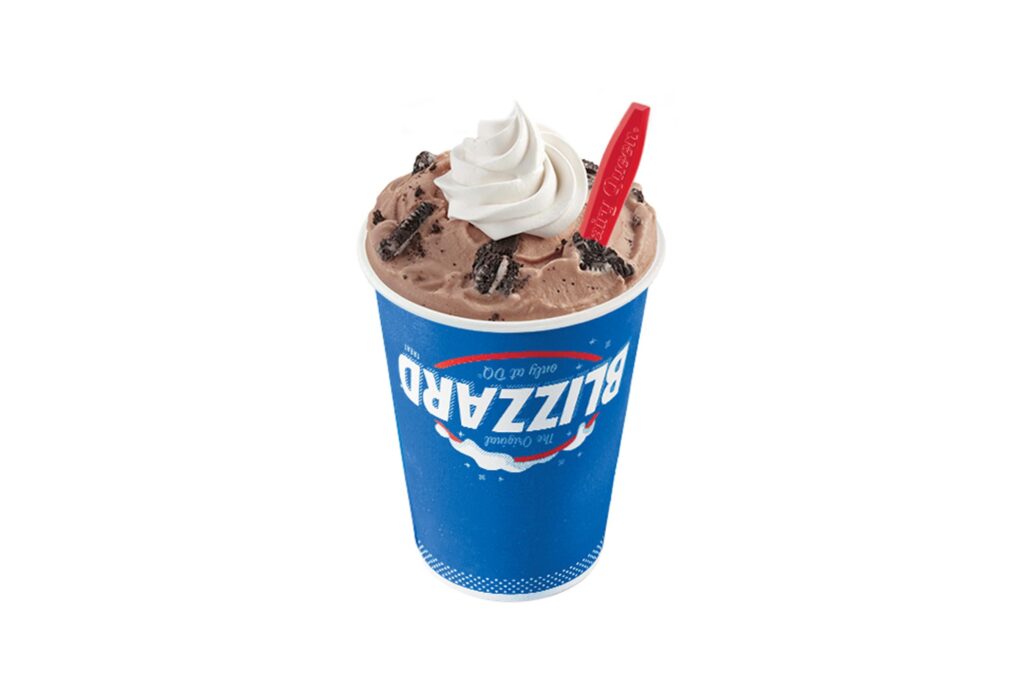