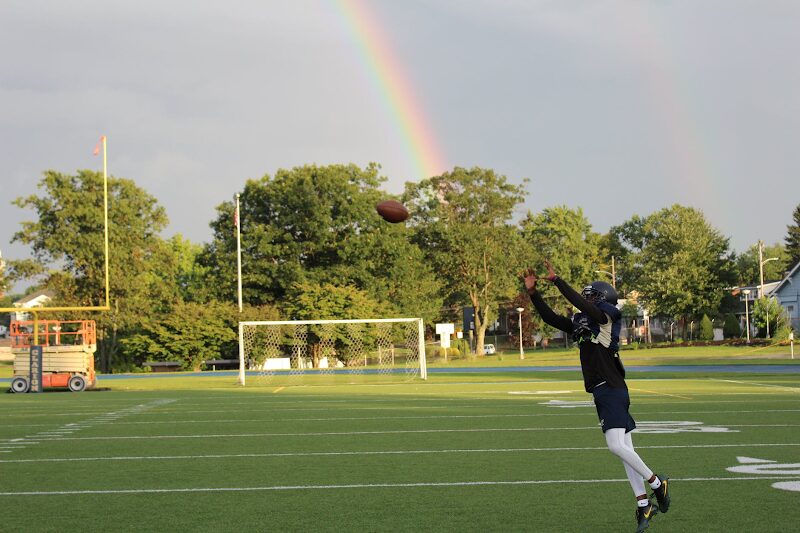 It was over in a flash when these teams met two years ago. Virginia had a four-touchdown lead less than three minutes into the second quarter. This time, William & Mary put up a better fight at Scott Stadium, taking the action further into the game (the scoreline probably doesn’t reflect this). William & Mary were playing their fourth game in 21 months.

On Saturday night, there was a lot of excitement in Scott Stadium for Virginia’s season-opening game against William & Mary. For the first time since 2019, fans dressed in orange, packed the stands and made a lot of noise as they watched the Cavaliers hit the field in person.

The UVA defense benefited from the crowd’s enthusiasm about the game’s first possession, driving William & Mary to a three-and-out. The subsequent punt was returned 55 yards deep into Tribe territory by Billy Kemp. The UVA offense, on the other hand, took a bit longer to shake off the rust, going three-and-out and settling for a field goal for their only points of the first quarter. 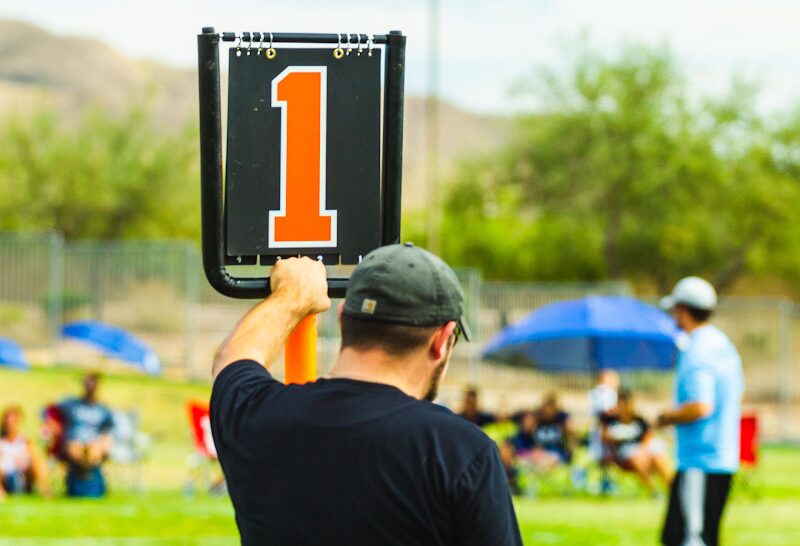 The Virginia defense was solid throughout the first half, forcing three-and-outs on William & Mary’s first five possessions. The Hoos offense couldn’t get anything going, and on fourth and one, Jacob Rodriquez couldn’t pick up the yard. The Virginia offense eventually figured it out after another three-and-out by William & Mary. Armstrong connected with Donatavion Wicks for 30- and 23-yard grabs, respectively, before scoring on a two-yard run.

William and Mary threatened with an 11-play, 58-yard drive, aided by a pass interference call on a likely uncatchable ball on the next drive. On the other hand, Virginia would get a break when Ethan Chang’s 42-yard field goal attempt fell short. Thompson displayed his versatility on the Cavaliers’ next drive with a 40-yard sprint that appeared to involve a stiff arm on each William & Mary defender. The drive ended with a brilliant five-yard fade to Ra’Shaun Henry in the end zone, giving the Hoos a 17-0 halftime lead.

Virginia’s first drive of the second half ended in a punt, but the Cavaliers scored on their next four possessions. William & Mary had another chance to score, but Nick Grant blocked Ethan Chang’s 36-yard field goal to preserve the shutout. Brennan Armstrong connected with Demick Starling on a 65-yard touchdown pass on the next UVA drive to make it 24-0. Armstrong threw for 336 yards and two touchdowns on 20 of 30 passing attempts. On the ground, he scored two touchdowns. Virginia’s offense totaled 545 yards, with 336 passing yards and 209 running yards. 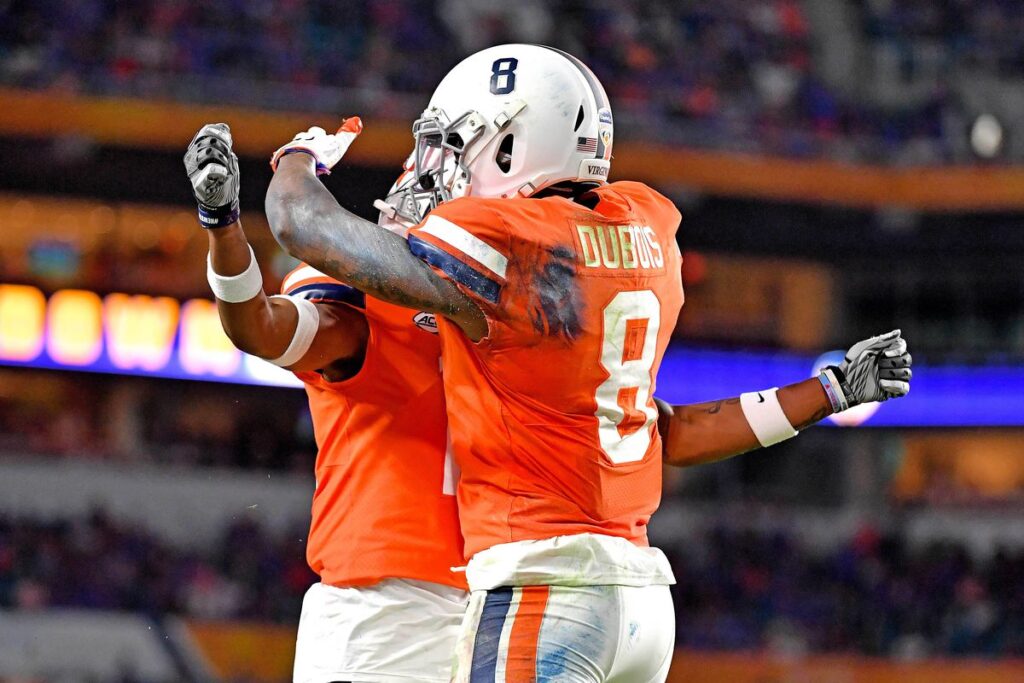 The Cavaliers expanded their lead to 27-0 when Duenkel made a 25-yard field goal on a drive that included a 25-yard gallop by Rodriguez. Henry had just missed another touchdown on a corner fade, and Thompson had just dropped a third-down throw in the end zone, so the Hoos were hungry for more. After Ryan Ripley left the game with cramps, his replacement snapped the ball over Wilson’s head and out the back of the end zone for a safety; two plays later, William & Mary would provide Virginia with a present. Virginia punished the Tribe by marching 55 yards in under two minutes, finished off with a touchdown run by Armstrong.

Virginia kept the pressure on to put together another touchdown drive with practically every Cavalier being involved. Thompson had two receptions to Wicks’ one. On a first down, Armstead ran 20 yards while lining up in the shotgun. Ronnie Walker Jr. smashed it in from nine yards out for the touchdown after catching an 11-yard pass earlier in the drive. The touchdown drive would cap off an otherwise impressive offensive performance.

In addition to his two rushing scores, Armstrong threw for 336 yards and two touchdowns on 20 of 30 passing attempts. Wicks had four receptions for 94 yards to lead the Hoos in receiving. On five carries, Armstead gained 54 yards, and Wayne Taulapapa added 48 yards on the ground. Thompson, on the other hand, was everywhere, collecting four passes for 63 yards and rushing for 46 yards on five carries, as expected. 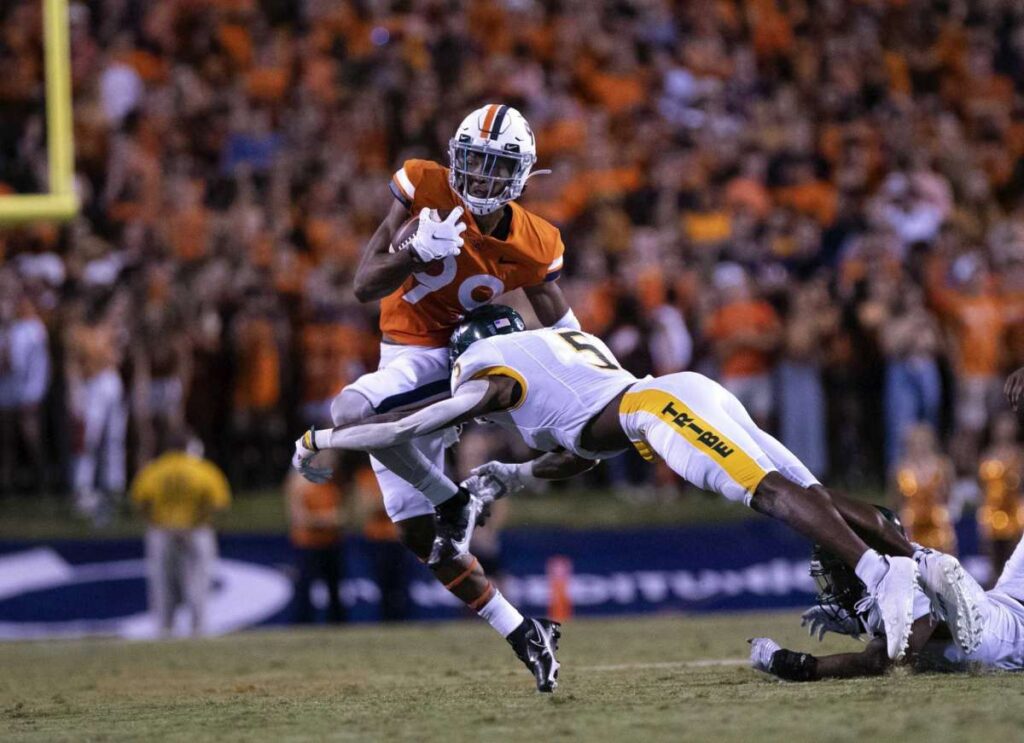 Wilson threw nine passes 83 yards for the Tribe. At the same time, Virginia limited running back Donavyn Lester to 42 yards on the ground and 23 yards via the air (both team highs). Virginia has a lot to be happy about this week, and they get to host Illinois next Saturday at home.

Illinois has played two games this season, giving Bronco Mendenhall and his teammates twice as much game film to prepare for this weekend’s showdown. On the other hand, the Illini are no easier to predict since they put on two significantly contrasting performances in weeks one and two. First, Illinois began the season with a hard-fought 30-22 victory over Nebraska, a conference opponent. The Cornhuskers were 6.5-point favorites going into the game – a slight upset.

Illinois had a disheartening 37-30 home loss to UT-San Antonio in week two following their historic win. In their ten-year history, the Roadrunners had never beaten (or even played) a Big Ten opponent. Therefore, the Cavaliers can be hopeful heading into this one.

Mahesh Bhupathi Net Worth 2021
To Top