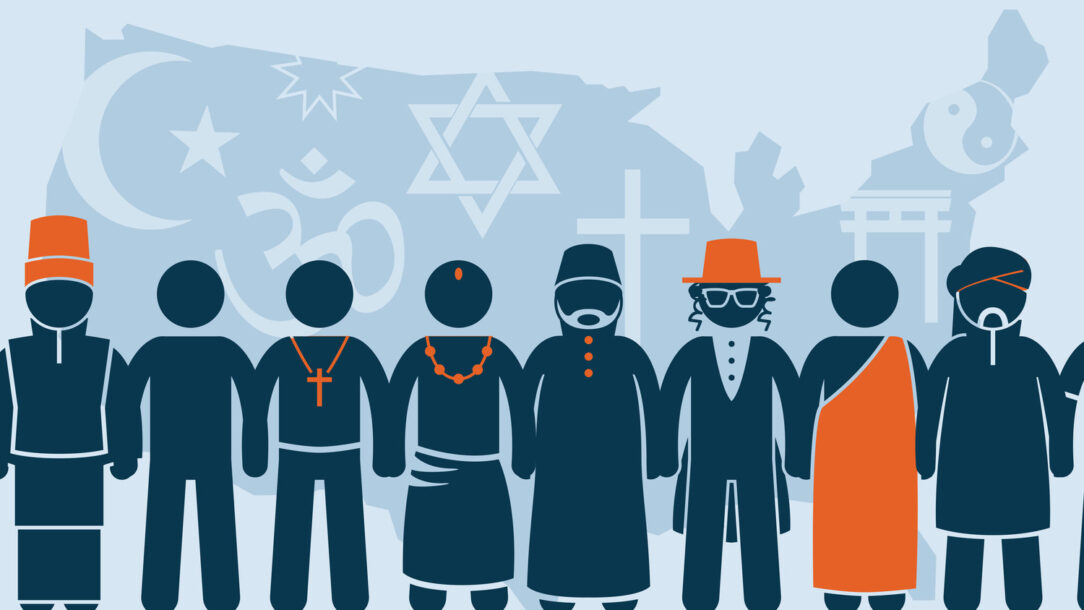 Most of the great cities of the world now are melting pots of people practicing different religions. The most widely practiced religions include Christianity, Islam, Hinduism, Sikhism, and Buddhism. Religions help guide people through their daily lives and gain spiritual fulfillment. If all religions are about help and guidance we should not aim to create conflicts with people of other faiths in the name of religion. If we fight in the name of a religion we are betraying the purpose of the very religion we follow.

The dangers and negative impacts of religious intolerance are numerous. The lack of trust among peoples creates barriers, affecting social relations and every day good will. Tribal feelings can arise where people of one religion won’t mix or trade goods with people of another religion. Communication can break down and suspicion can lead to conflict.

The first President of the United States and a leader of the American Revolution, George Washington blamed the destruction of peace in societies on religious intolerance. He said:

“Of all the animosities which have existed among mankind, those which are caused by difference of sentiments in religion appear to be the most inveterate and distressing, and ought most to be deprecated.

Conflicts often arise when extremists of one religion injure or murder worshippers of another. The result often leads to continuous tit for tat attacks by members of each group, whom are drawn in to conflict. If a state has a strong police force and legal system that protects freedom of religion the outbreaks of extremist action can often be contained. Widespread outbreaks of continual violence are more prevalent in developing nations without strong legal systems to enforce peace and punish the perpetrators.

According to Wikpedia.org Nigeria, the most populous African country (with a population of over 200 million in 2018), is ‘nearly equally divided between adherents of Christianity and Islam.’

On 27 th December 2019, Islamic State in Nigeria released a video, claiming to show the beheading of 44 Christians. According to the BBC, IS said it was part of its recently declared campaign to “avenge” the death of its leader Abu Bakr al-Baghdadi during a US raid in Syria in October. The BBC also estimates over 1000 Christians were murdered by the group in 2019.

Nigerian President Muhammadu Buhari said in response, “”We should, under no circumstance, let the terrorists divide us by turning Christians against Muslims because these barbaric killers don’t represent Islam.”

In 2019 an Australian man was charged with ‘terrorism’ for carrying out the shooting and murder of 51 Muslim worshippers in Christchurch, New Zealand. It was New Zealand’s worst peacetime massacre that led to changes to the country’s gun laws.

New Zealand Prime Minister Jacinda Ardern, during a news conference in Wellington, took swift and strong action. She said, the government will sharply restrict access to “virtually all” semi-automatic weapons by reclassifying them to require a police permit.

“I can assure people that there is no point in applying for such a permit,” she said.

With out exception all the major religions – if practiced properly have an emphasis on peace and love to our fellow brother or sister.

According to KhalleiTimes.com Muslims should be inherently peaceful. The Quran presents the universe as a model, which is characterized by harmony and peace:

(Quran: 36:40) When God created heaven and earth, He so ordered things that each part might perform
its function peacefully without clashing with any other. The Quran tells us that “It is not allowable”.

In the Bible Hebrews 12:14 peace is clearly supported by Christianity:

‘Strive for peace with everyone, and for the holiness without which no one will see the Lord.

We are usually born into following a religion due to the geographical area and traditions we or our families originate from. There are many benefits of living peacefully in cities with people of other religions. The roots of people of different religions often originate from different corners of the world. They bring with them interesting knowledge of different customs, cuisine and general knowledge.

Eating a Pakistani dinner at my Muslim friend Adil’s house, situated in a dominant British, Christian city – it should be said, was always a highlight of my week. Myself and Christian friends were always offered a warm familial welcome. Incredible, spicy Pakistan fare was always put before us and even fostered my love of cooking in the future.

If we live in a melting pot of different religions, religious tolerance is the best step forward. We should enjoy the benefits of learning and sharing other people’s ways of life and importantly not dislike someone for the religion they practice.

If we witness religious intolerance we should report it to the police or authorities. If we believe a local or national government is showing particular favoritism to a particular religious section of society we should secure evidence and present it to local newspapers or seek legal advise with a lawyer who specializes with corruption and such matters. Breaking fair play in business at any level is a form of corruption or lawbreaking. After all, if a government official awards grants to friends or family, diverting from the fair selection criteria of his or her job, this is a criminal offense by law. The same rules apply if an official unfairly awards grants and funding to members of a religious group. If the legal system and police do not support religious tolerance we should peacefully pressure politicians and political parties to adopt stronger policing and tolerance laws.

I end with wise Buddhist words:

“Those who attempt to conquer hatred by hatred are like warriors who take weapons to overcome others who bear arms. This does not end hatred, but gives it room to grow. But, ancient wisdom has advocated a different timeless strategy to overcome hatred.