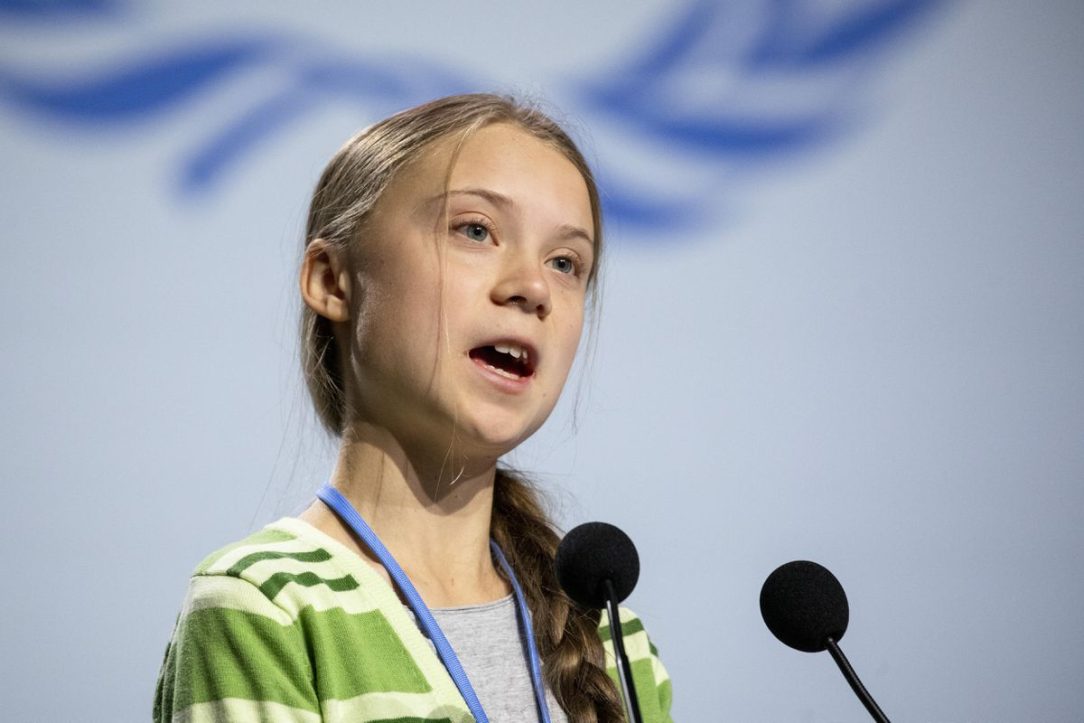 Environment campaigner, Greta Thunberg claims humanity is facing an existential crisis because of global warming. She reinforces her convictions with scientific opinion.

Speaking at international conferences, she famously criticizes world leaders saying that too little action is being taken to reduce global emissions and prevent global warming. She may have a valid point when she says world leaders, journalists and business leaders don’t take her seriously. She’s only 16 years old and  it’s clear some politicians don’t take her seriously or the threat of global warming. To anybody who values scientific opinion,  Thunberg’s valid warnings about the environment are too ominous to ignore.

“My message is that we’ll be watching you.

“This is all wrong. I shouldn’t be up here. I should be back in school on the other side of the ocean. Yet you all come to us young people for hope. How dare you!

“You have stolen my dreams and my childhood with your empty words. And yet I’m one of the lucky ones. People are suffering. People are dying. Entire ecosystems are collapsing. We are in the beginning of mass extinction, and all you can talk about is money and fairy tales of eternal economic growth. How dare you! ‘This Is All Wrong,’

‘This Is All Wrong,’ “For more than 30 years, the science has been crystal clear. How dare you continue to look away and come here saying that you’re doing enough, when the politics and solutions needed are still nowhere in sight.

“You say you hear us and that you understand the urgency. But no matter how sad and angry I am, I do not want to believe that. Because if you really understood the situation and still kept on failing to act, then you would be evil. And that I refuse to believe.

“The popular idea of cutting our emissions in half in 10 years only gives us a  50% chance of staying below 1.5 degrees Celsius, and the risk of setting off irreversible chain reactions beyond human control.

“Fifty percent may be acceptable to you. But those numbers do not include tipping points, most feedback loops, additional warming hidden by toxic air pollution or the aspects of equity and climate justice. They also rely on my generation sucking hundreds of billions of tons of your CO2 out of the air with technologies that barely exist.

“So a 50% risk is simply not acceptable to us — we who have to live with the consequences.

“To have a 67% chance of staying below a 1.5 degrees global temperature rise – the best odds given by the Intergovernmental Panel on Climate Change – the world had 420 gigatons of CO2 left to emit back on Jan. 1st, 2018. Today that figure is already down to less than 350 gigatons.

“How dare you pretend that this can be solved with just ‘business as usual’ and som technical solutions? With today’s emissions levels, that remaining CO2 budget will be entirely gone within less than 8 1/2 years.

“There will not be any solutions or plans presented in line with these figures here today, because these numbers are too uncomfortable. And you are still not mature enough to tell it like it is.

“You are failing us. But the young people are starting to understand your betrayal. The eyes of all future generations are upon you. And if you choose to fail us, I say: We will never forgive you.

“We will not let you get away with this. Right here, right now is where we draw the line. The world is waking up. And change is coming, whether you like it or not.

“I have some good news and some bad news regarding the climate emergency. I will start with the good news.

“The world, as a small number of people have been saying lately, will not end in 11 years. The bad news however is that around the year 2030, if we continue with business as usual, we will likely be in a position where we may pass a number of tipping points. And then we might no longer be able to undo the irreversible climate breakdown.

“A lot of people, a lot of politicians, business leaders, journalists say they don’t agree with what we are saying. They say we children are exaggerating, that we are alarmists. To answer this I would like to refer to page 108, chapter 2 in the latest IPCC report. There you will find all our “opinions” summarized, because there you find a remaining
carbon dioxide budget. Right there it says that if we are to have a sixty-seven percent  chance of limiting the global temperature rise to below 1.5 degrees, we had on January 1 st 2018, 420 gigatons of carbon dioxide left in our CO2 budget. And of course that number is much lower today. We emit about 42 gigatons of CO2 every year.

“At current emissions levels, that remaining budget is gone within roughly eight and a half years. These numbers are as real as it gets, though a great number of scientists suggests that they are too generous, these are the ones that have been accepted by all nations through the IPCC.

“And not once, not one single time have I heard any politician, journalists or business leader even mention these numbers. It is almost like you don’t even know they exist, as if you haven’t even read the latest IPCC reports on which the future of our civilization is depending.

“Or maybe you are simply not mature enough to tell it like it is. Because even that burden you leave to us children. We become the bad guys who have to tell people these uncomfortable things, because no one else wants to or dares to. And just for quoting and acting on these numbers,  these scientific facts, we receive unimaginable amounts of hate and threats. We are being mocked and lied about by elected officials, members of Parliament’s, business leaders,  journalists. What I really would like to ask all of those who question our so-called “opinions” or think that we are extreme: – Do you have a different budget for at least a reasonable chance of staying below the 1.5 degrees of warming limit? Is there another intergovernmental panel on climate change? Is there a secret Paris agreement that we don’t know about? One that not declude the aspect of equity? Because these are the numbers that counts, this is the current best available science. You can’t simply make up your own facts just because you don’t like what you hear.

“There is no middle ground when it comes to the climate and ecological emergency. Of course you could argue that we should go for a more risky pathway, such as the alternative of 580 gigatons of CO2 from january 1st 2018, which gives us a 50/50 percent chance of limiting the global temperature rise to below 1.5 degrees. That amount of carbon dioxide will run out in about 12 years of current business as usual. But why should we do that, why should we accept taking that risk, leaving the future living conditions for humankind to a 50/50 flip of a coin. 420 gigatons left of CO2 to emit. And now that number is down to less than 360 gigatons.  And please note that these figures are global and therefore do not say anything about the aspect of equity, clearly stated throughout the Paris agreement, which is absolutely necessary to make it work on a global scale. That means that richer countries need to get down to zero emissions faster, so the people in poorer parts of the world can heighten their standard of living by building some
of the infrastructure that we have already built, such as roads, hospitals, electricity, schools and providing clean drinking water.

“And because you have ignored these facts, because you and pretty much all of the media to this very minute, keep ignoring them, people do not know what is going on. If you respect the science,  if you understand the science, then this is it. 420 gigatons of CO2 left to emit on January 1st  to have a sixtyseven percent chance of staying below a 1.5 degrees of global temperature rise, according to the IPCC.

“In the Paris agreement we have only signed up for staying below 1.5 to 2 degrees of temperature rise. And that of course gives us a bigger remaining carbon dioxide budget. But the latest IPCC report shows  that aiming instead for below 1.5 degrees would significantly reduce the climate impacts, and that would most certainly save countless of human lives.

This is what it’s all about, this is all that we are saying. But I will also tell you this:  -You cannot solve the crisis without treating it as a crisis, without seeing the full picture. You cannot leave the responsibility to individuals, politicians, the market or other parts of  the world to take. This has to include everything and everyone.

“The science is clear and all we children are doing is communicating and acting on that united science. Now political leaders in some countries are starting to talk. They are starting to declare climate emergencies  and announcing dates for so-called climate neutrality. And declaring a climate emergency is good. But only setting up these vague, distant dates and saying things which give the impression of that things are being done and  that action is on the way, will most likely do more harm than good. Because of the changes required are still nowhere in sight. Not in France, not in the EU, nowhere. And I believe that the biggest danger is not our inaction. The real danger is when companies and politicians are making it look like real action is happening, when in fact almost nothing is being done, apart from clever accounting and creative PR.

“The climate and ecological emergency is right here, right now. But it has only just begun, it will get worse. 420 gigatons of CO2 left to emit on January 1st 2018 to have a 67 percent chance of staying below a 1.5 degrees of global temperature rise. And now that figure is already down to less than 360 gigatons.

“At current emissions levels that remaining budgets is gone within roughly eight and a half years. In fact, since I started this speech the world has emitted about 800,000 tons of carbon dioxide.  And if anyone still has excuses not to listen, not to act, not to care, I ask you once again: -Is there another Intergovernmental Panel on Climate Change? Is there a secret Paris agreement that we don’t know about? One that does not include the aspect of equity? Do you have a different budget for at least a reasonable chance of staying below 1.5 degrees of global temperature rise? Some people have chosen not to come here today, some people have chosen not to listen to us, and that is fine, we are after all just children. You don’t have to listen to us, but you do have to listen to the United science, the scientists.
And that is all we ask, just unite behind the science!”

‘Our house is still on fire’: Greta Thunberg’s full speech at the World Economic Forum

FindaSpeech is backing the plant 1 Trillion trees campaign to help reduce CO2 in the atmosphere. To help this worthy cause please donate to Onetreeplanted.org.