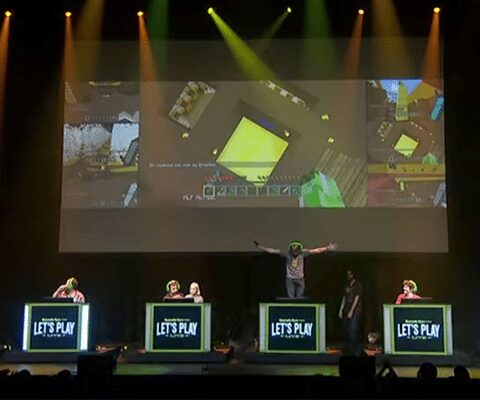 It might be a stretch to call competitive gamers the new rock stars, but, thanks to Rooster Teeth and Mills Entertainment, they will be hitting the road for a nationwide tour like a band of musos.

Dubbed “Let’s Play Live,” the tour will kick off at the Dolby Theatre in Hollywood on June 17. It will feature personalities from YouTube gaming channels Achievement Hunter, Funhaus, The Creatures, Kinda Funny and ScrewAttack in what is being billed as “a non-stop frenzy of gaming and comedy.”

Founded in 2003, Rooster Teeth has a multi-channel network that’s racked up over 25 million YouTube subscribers and more than 5 billion views and a website that gets 3 million unique monthly visitors, powered by such popular online series as “Red vs. Blue,” “RWBY,” “The Gauntlet.” Earlier this year, the company – which was acquired by Fullscreen in 2014 – released its first feature film, the action-comedy “Lazer Team,” in theaters and online, where it’s a YouTube Red exclusive.

“When we pulled-off the first ‘Let’s Play Live’ in April of 2015, it was a wildly successful, first-of-its-kind event that nobody has been able to duplicate,” said Geoff Ramsey, Rooster Teeth co-founder and creative director of Let’s Play, in a statement. “Now we’re bringing it back, and this time we’re including a ton of our friends to make it bigger, funnier, and dumber than ever (and less work for us).”

The tour is being produced in partnership Mills Entertainment, which has produced live events in more than 300 cities in 12 countries across five continents featuring everyone from “Long Island Medium” Theresa Caputo to Monty Python’s John Cleese and Eric Idle. Last year, the company mounted world tours for top digital influencers including Tyler Oakley, Lilly Singh, Kian Lawley and JC Caylen. Creative Artists Agency (CAA) acquired an equity position in the company in April 2015.

Tickets for “Let’s Play Live” start at $50 and go on sale Friday, April 22, at 10am PST at www.RoosterTeethLive.com. Rooster Teeth will be offering  a limited number of VIP packages featuring a meet & greet, a VIP lanyard and official “Let’s Play Live” swag.