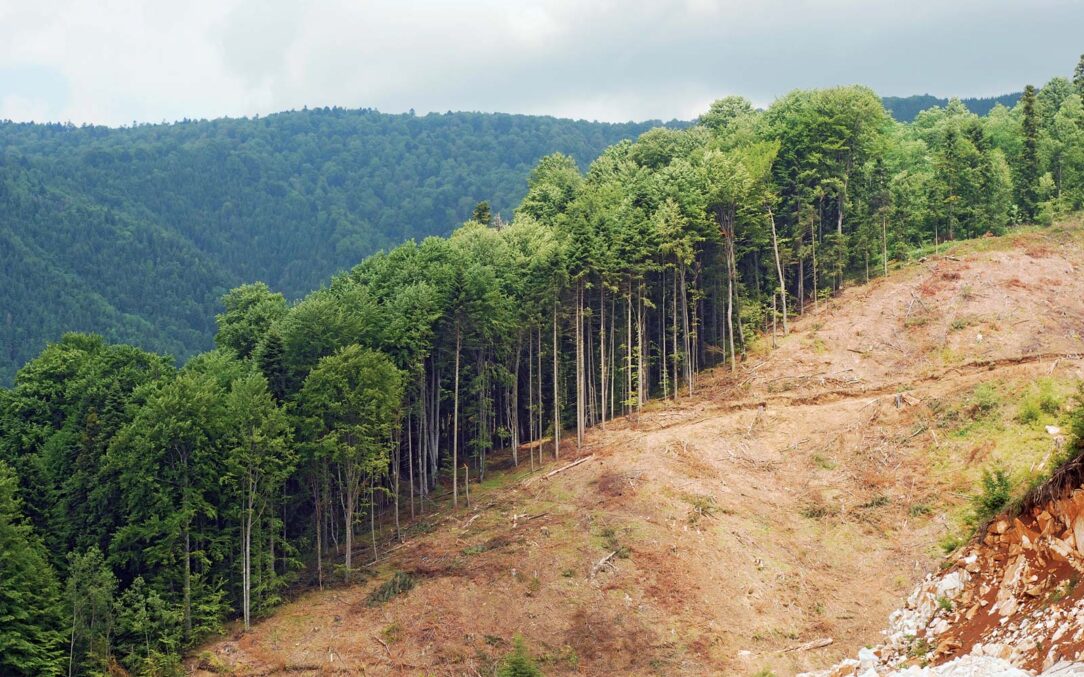 Deforestation, mostly caused by humankind has many negative impacts on the environment. The loss of wildlife is a terrible consequence of human encroachment on habitats. Grim news, according to a recent report by the World Wild Life Fund, is humans have wiped out 60% of animal populations since 1970. Written by  59 scientists from across the globe,  the report blames the massive need for consumption of food and resources for the losses.

According to Merriam-Webster dictionary, the definition of deforestation is the:

Action or process of clearing of forests also: the state of having been cleared of forests.

The following is a list of known negative impacts deforestation has on the world:

According to the World Bank since humankind has been cutting down trees over 46% of world forests have been felled.

Mike Barrett, executive director of science and conservation at WWF was scathing of the impact of humankind on wildlife:

“If there was a 60% decline in the human population, that would be equivalent to emptying North America, South America, Africa, Europe, China and Oceania. That is the scale of what we have done.”

Barrett continued to say this is not just about the sad destruction of ancient species, the most sobering thought is we’re actually jeopardizing our own future.

Farming, grazing of wildlife, drilling, and mining account for more than half of all deforestation according to Nat Geo. Now there are two great forests left, The Amazon and the Indonesia rainforest. While illegal logging has a lot to do with deforestation, many farmers cut down trees to create farmland for money-making crops. The Union of Concerned Scientists (UCS) reports that just four commodities are responsible for tropical deforestation: beef, soy, palm oil, and wood products.

Indonesia has the third-largest area of rainforests on Earth but is second only to Brazil in terms of the area lost each year. Vast areas of rain forest have been destroyed to grow palm oil. In 2000 Indonesia had four million hectares of oil palm plantations. By 2019 that figure is 11.9 million hectares. The area of destroyed forest is so vast Indonesia’s forests and peatlands have become one of the highest sources of greenhouse gas emissions in the world.

A great deal of credit goes to Norway for trying hard to help Indonesia stop deforestation. In May 2010, Norway and Indonesia signed a Letter of Intent for a REDD deal in Indonesia ( “reducing emissions from deforestation and forest degradation). Norway offered to pay US$1 billion to Indonesia if the country could cut back its deforestation.

In December 2010, the President Susilo Bambang Yudhoyono selected Central Kalimantan as the REDD pilot province, as part of the Norwegian REDD deal. The province created a REDD+ Task Force, an Ad-hoc Multi-Stakeholder Team, a Safeguards Information System, and REDD+ Social and Environmental Standards.

When the moratorium was announced in 2011, Teguh Surya of Walhi (Friends of the Earth Indonesia) told the Jakarta Post that,

“The President ignored input from civil society who care about conserving forests and threw its support to big businesses, such as palm oil plantations.”

Ten years since the agreement was made Indonesia is finally set to receive the first small part of a $1 billion reward pledged by the Norwegian government for preserving some of the Southeast Asian country’s vast tropical rainforests. The reward is due to Indonesia for preventing the emission of 4.8 million tons of carbon dioxide equivalent (CO2e) through reducing its rate of deforestation in 2017.

World resources Institute backs that Indonesia Indonesia was, ‘one of the few tropical nations to reduce its deforestation rates in 2017’. Against the trend of world forest loss, Indonesia ‘experienced a 60 percent drop in primary forest loss compared to 2016’. Still, this has not prohibited all forest loss, it’s simply slowed down.

While the size of the reward is still under negotiation, it is likely to be at least $24 million in light of Norway’s commitment to pay for 4.8 million tons of averted CO2 emissions and a $5 per ton price agreed in REDD+ transactions with other countries.

It is necessary to look at why so much forest is being cleared to provide space for palm oil cultivation. Palm oil is the world’s most popular vegetable oil is in 50% of consumer products. Palm oil has special qualities. The oil has a high melting point and is high in saturated fats, which is perfect for creating creams and confectioneries. Most other vegetable oils need to be partially hydrogenated – where hydrogen atoms are chemically added to the fat molecules to achieve the same consistency. This process results in unhealthy trans-fats which can cause gout and diabetes. Palm oil is in many of our daily consumables such as shampoo, creamer, butter, toothpaste, soap and even vehicle fuel.

Palm oil has other benefits. For the farmer living in tropical climates, palm oil is easy to grow compared with alternatives and much more can be grown in a smaller space. However, the bad news is palm oil can only be grown in areas shared with rainforest and their valuable inhabitants. Malaysia and Indonesia own around 13 million hectares of oil palm plantation adding up to almost half the world’s total crop. The grim news is according to the BBC, 77 million tonnes of palm oil was produced, ‘for the global market in 2018, and that is expected to grow to 107.6 million tonnes by 2024.’

Some environmentally aware companies have been successful in finding replacement ingredients for palm oil. UK cosmetics brand LUSH swapped palm oil with a blend of rapeseed and coconut oil.

Staggeringly, up to half the palm oil imported by the European union up to 2017 was for fuel. The EU’s Renewable Energy Directive set an ambitious target for 10% of road transport energy to come from renewable sources by 2020, and biodiesel consisting of palm oil had been very important in reaching the goal. This is hard to believe as rainforest would have been felled to reach this target. Thankfully the EU has seen sense announced the phasing out of palm oil in fuel. One of the most important challenges of the century now faces scientists: to reduce the pressure on tropical rainforests by creating a plant that is as productive as oil palm.

According to the World Wildlife Fund,

the Amazon is the biggest deforestation front in the world and interventions are urgently needed to prevent a large-scale, irreversible ecological disaster. More than a quarter – of the Amazon biome will be without trees by 2030 if the current rate of deforestation continues.

Evidence by the WWF suggests that the largest deforestation areas are linked to areas with new roads. An increase in soybean production, ranching. Mining and oil and gas exploration are also to blame as are Bolivian hydro dams.

The Brazil president was alarmingly casual about deforestation:

You might ask who are we to complain when our forbears cut down forests for land and resources on most major continents? This is true, but now the hand of time is ticking ominously to the destruction of the environment, animals, and our own existence so it’s up to us to help countries like Indonesia, Malaysia and Brazil to veer away from deforestation before it’s too late.

FindaSpeech is also backing the plant 1 Trillion trees campaign to help reduce CO2 in the atmosphere. To help this great cause please donate to Onetreeplanted.org.